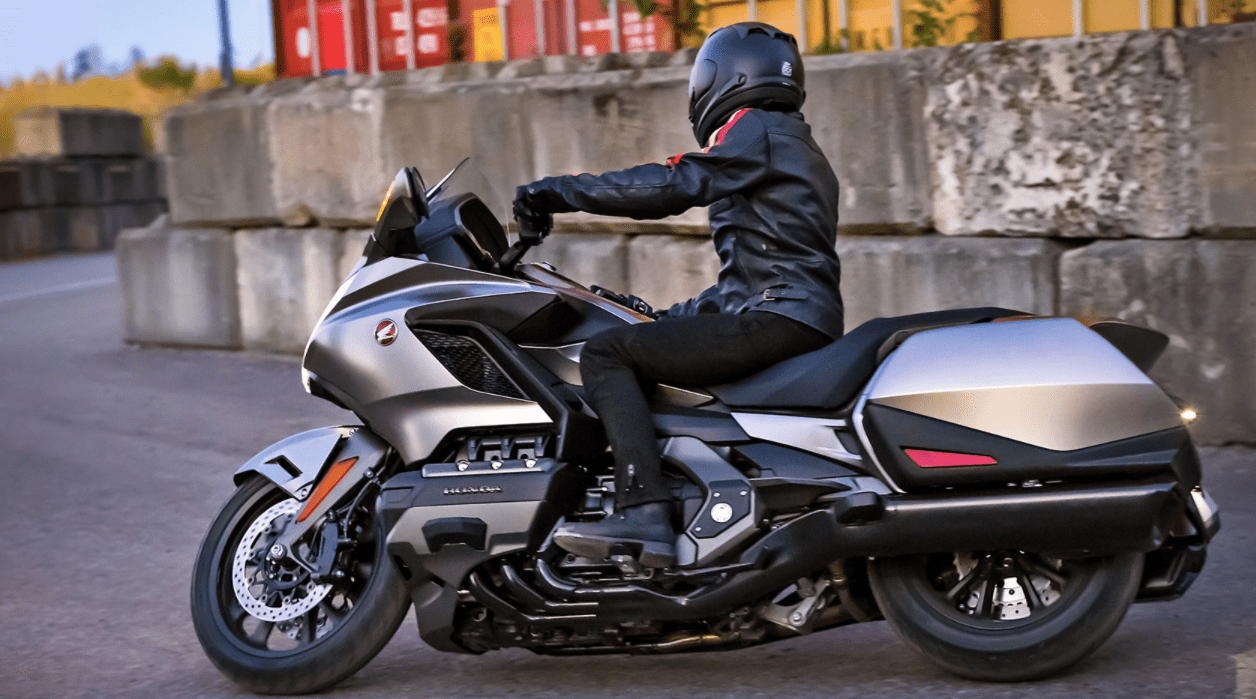 The name of the family of Japanese luxury touring companies, created for the US market four decades ago, has become a household name today in most parts of the world. Each new generation set the standards for the class and made a revolution. The current one was no exception. Meet – Honda Gold Wing Tour 2018.

Just as a rare bird flies to the middle of the river, likewise, a rare bike is delayed in production for around 7-9 years because fashion changes too quickly and new technologies rapidly develop. However, the previous generation Gold Wing was an exception to the rule; the motorcycle was so successful that for 18 years, it was produced with only minor changes, competing on equal terms with the “youth”.

NOT JUST A MOTORCYCLE

This is the last frontier that separates a motorcycle from any luxury coupe: a 1.8-litre boxer “six” and over 400 kg of curb weight! How much further? For Honda, the step forward was the 180-degree turn – following electronic gadgets that are becoming more functional and smaller, shrinking in size and luxury.

The new model, while retaining the length of the wheelbase, is generally more compact and lighter. The new generation Gold Wing’s curb weight has dropped by 48 kg at once, and now in the version with the “automatic” is “only” 383 kg. Simultaneously, the boxer “six” provides such a low center of gravity that, together with other changes, allows you to move comfortably on this motorcycle without outstanding physical data.

The new engine is shorter and lighter, but its characteristics have changed little: the volume has grown by a “cube” (up to 1833 cubic cm), power – from 117 to 126 “horses”, and the two-valve heads of the block have given way to four-valve ones. Having received an electronic throttle control and a start-stop system, the engine is now more economical, and therefore the tank reduced to 21 liters does not affect the power reserve.

But the transmission is a real revolution; from now on, the Gold Wing is available with a 6-speed “mechanics” and a 7-speed “robot” DCT. The test bike was equipped with it, and it is with it that acceleration to the speed, now limited to 180 km / h, is especially impressive. Gear changes are so lightning fast that they are more reminiscent of the alternating separation of stages from the rocket, and the engine thrust is crazy.

Reverse gear is required for such a large motorcycle, activated by a particular key on the remote control. By the way, it was also in the previous generation. Still, on the new product, it was supplemented with the ability to “ride” the motorcycle by pressing a button, not only backwards but also forward. There is a considerable amount of electronics here: a start-up assistance system, completely keyless access, traction and cruise control, ABS, “music”, navigation, separate heating of the saddle and handles, adjustment of the stiffness of the suspensions and the height of the windshield, pressure sensors in the wheels … It’s a little strange that the parking brake remained mechanical.

EVERYTHING THAT CONCERNS YOU

How to manipulate all this functionality? As it turned out, not too difficult. If it was possible to get lost in the previous generation’s controls, then in the new product, a good half of the keys were replaced with a joystick on the tank, duplicated by the keys on the left panel. In the dashboard menu, settings and adjustments go to dozens. Although the central systems still have their own keys, which do not have to look for a long time even in the dark – the remotes are backlit.

The ergonomics of the driver’s seat is a reference – the landing is straight, the steering wheel is not too high, the legs are bent at the knees at right angles, a giant soft saddle, in which you can easily drive 1.5-2 thousand km per day. What else is needed? The trunk? Yes, its volume in the Honda Goldwing Tour was reduced to 110 litres, but there is an explanation for this: Japanese studies have shown that these motorcycles’ owners rarely used the previous 150 litres entirely.

However, as an option, you can order a “grill” on the top case, where you can tie additional luggage, and minimal items like keys are folded into a lockable glove compartment at the pilot’s right knee. The basic equipment has one more storage box located in the tank lining, but there was an optional airbag in its place in our version. It appeared in the previous generation and migrated to the newest. By the way, the Honda Gold Wing remains the only motorcycle in the world with such a system.

Of course, the chassis has also changed: a new aluminium frame, a redesigned one-sided swingarm with a Cardan hidden inside, but the main thing is that the front suspension is no longer telescopic but parallelogram. Sophisticated and incredibly beautiful levers allow you to separate the control and damping functions, eliminating the standard forks pushing during the brakes and removing unnecessary vibrations from the steering wheel. Thanks to this, the handling and comfort of the new Gold Wing are even closer to those of automobiles.

The bottom line is that Honda has once again set the standard in the luxury touring class. Although the volume of luggage capacity has decreased by almost a third, becoming practically the most modest in the class, with the inheritance of all the family’s best qualities, the new model got rid of many shortcomings. Having received one crucial advantage – an automatic transmission, albeit available only as an option.