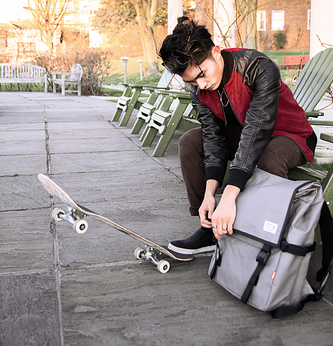 Tristan Leyco was boring in Lucena City in the Philippines, and moved to Queens, New York at the age of 3. The early part of his life saw a passion for music, when he played multiple instruments including the piano, clarinet, guitar, joined the school band and sand in the church choir. He still practices the craft, along with being able to produce, write, mix and master his own music. He one day hopes to produce an album, but for the time being is focused on growing his personal highly successful photography and videography brand, along with the two companies he’s cofounded – skateboard brand Implied Skateboards, and digital lifestyle publication, ModelGrams.

How Did He Start?

Leyco was lucky enough to win a social media contest hosted by none other than Dan Bilzerian in 2013, which he leveraged to gain attention on social media and set in motion his creative endeavours. He began working with numerous companies, such as Nordstorm & Cole Haan, photographing their in-store event of their newly released Zerograd shoe. Shortly after this he was hired as a full-time content creator for adventure-travel company, Sourced Adventures. He decided to go rouge in 2016 when he was introduced into the world of implied and nude photography by professional photographer, Angel Isidoro, better known by his alias Shoot2iLL. He now works with some of the top and most well-known models in the US, and has built his personal brand to great highs. As of today, he is sitting pretty with a following of over 150,000.

“I didn’t want to chase a job where my sole purpose is to live in the thought of tomorrow.”

But when did Leyco decide to quit his job and go all-in with his personal brand? He decided to make a go for it when his monotonous routine wasn’t serving him any longer. He has perviously mentioned that he felt like “Jim Carey in The Truman Show. Following the same routine every single day just expecting change to happen”. Leyco chose then to make a decision. He would no longer simply sit around and wait for opportunities to arise, but would instead go out and actively pursue them. He switched things up, developed an amazing routine and pushed himself beyond his limits every day.

Rather than focusing his whole attention on just photography, Leyco chooses to take inspiration from a range of sources. “It’s all about being in the right state of mind and being present with my emotions in that very moment… I’m inspired by an accumulation of various mediums; art, poetry, movies, and music. Subject matter wise I find myself deeply enthralled within the realm of love and romance.”

Leyco preaches the importance of having limitless creative outlets to fall back on in order to maintain a sound mind and remain creatively productive. His motivation comes from the fact that he gets to do what he loves every single day. “I’m healthy, I’m breathing and I’m loved. As unfortunate as it is, not everyone is given those simplest of luxuries. I know that someone out there is working harder than me but I also know that someone out there is pushing through circumstances worse than I. As I see it, to not work my very hardest would be extremely ungrateful of me and a huge disservice to the beautiful fragility of life.” This outlook is admirable, and a great reminder that although it might be scary, as long as you stay authentically true to yourself and grind as hard as you possibly can, then great things will come.

His journey can be witnessed on Instagram at @tristanleyco