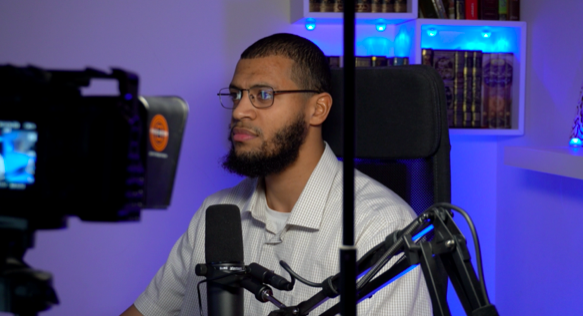 Barcelona-born, 27-year-old Muhammad Al Andalusi is not only the founder of Andalusinstitute.com but a young man inspiring others to take their past pain, present push-backs, potential and passion and position it to make a profit.

In his attempts to tell all of his past and present pains and how it propelled him to his peak potential, Andalusi hopes to inspire others who have endured a painful past, or an obstacle-filled present and use it to fulfil their potential and passion.

Andalusi said, “My father is Senegalese and my mother is Spanish. I struggled emotionally and physically. Physically being overweight because of the long 16-hour days sitting on the laptop while trying to grow different businesses and failing at it, in the affiliate marketing field, as well as Amazon FBA and social media marketing, I would break down in tears.”

He continued, “The inspiration for this startup came from the struggle I faced when I was 18 after I met the beauty of Islam. This meeting of Islam pushed me to start looking for an Arabic teacher or program in my hometown of Barcelona. I only found programs that were heavily focused on grammar and as a fluent speaker of four different languages, at that time, to me it was completely absurd. In 2012, the opportunity to learn Arabic in Egypt opened up to me and I took my bags and went there. I ended up staying for close to 6 years.”

After his Arabic studies, Andalusi found himself without a job in his field, which forced him to work as a food delivery rider in London. He said, “I tried starting up side hustles like private label businesses and affiliate marketing, but I kept failing and it didn’t make me happy to do anything other than anything related to my Arabic studies.”

In 2018, and adding to his struggles, Andalusi found himself with a debt of $9000. “That took me the whole year to pay off. I was living at my grandmother’s apartment while my wife and two kids were at her family’s house because I couldn’t afford rent for all of us. In the beginning of 2019, I launched the institute and within six months, unexpectedly, we felt overwhelmed by the immense high demand which led us to cross six figures in revenue and since then we’ve averaged $30,000 per month.”

As a polyglot speaking five languages, Andalusi put together his passion and know-how to form a high-quality program. “Students join not knowing Arabic and within months they can reach a level in fluency in classical Arabic language that many born Arabs nowadays don’t even have.”

The program not only helps students to develop their language skills but also encourages them to be lifelong learners by inculcating in them discipline and a strong mindset to live purposefully. “One of the reasons why we are successful, after the help of Allah, in my opinion, is the knowledge I have about language learning.” Like Andalusi, take past and present pains and push-backs and push forward with passion and your purposeful peak will be reached and your potential profit achieved.