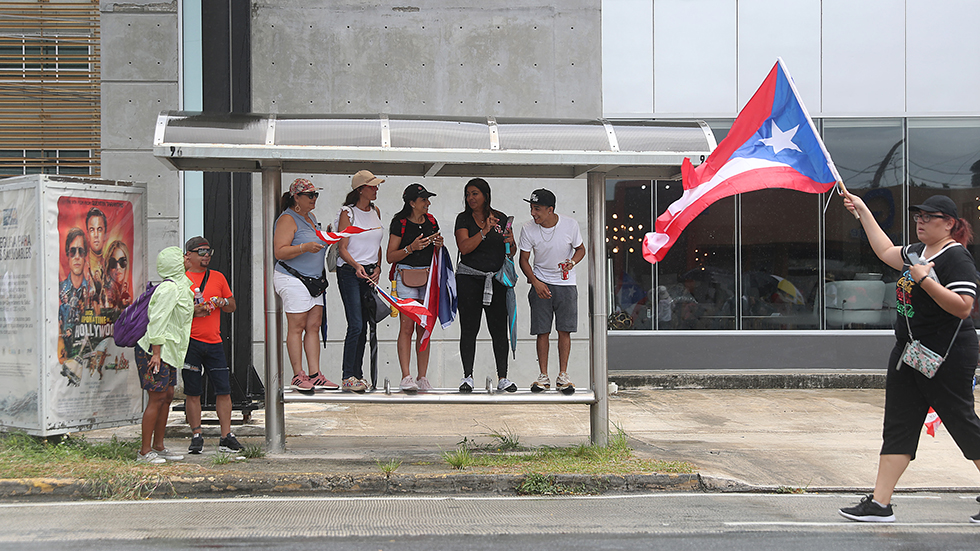 Puerto Rico Gov. Ricardo Rosselló’s resignation has thrust the U.S. territory into uncharted constitutional waters, as the scandal that ended his administration also broke the established line of succession.

Vázquez was suspended from her duties in 2018, accused of peddling influences to assist an investigation into a break-in at her daughter’s house.

Vázquez was cleared of the charges and quickly reinstated by Rosselló.

Under the territory’s constitution, the secretary of state is supposed to take over in case the governor becomes absent for any reason, but former Secretary of State Luis Rivera Marín resigned earlier this month, vacating the position.

Rosselló and Rivera both resigned in the aftermath of the release of messages from a group text that included the governor’s closest allies, where political opponents, journalists and hurricane victims were mocked, sometimes using homophobic and misogynistic language.

Finance Secretary Raúl Maldonado, another member of the texting group, also resigned after the leaks.

Rosselló was not directly implicated in the corruption scandal, but tensions were already high when the texts were published by the island’s Center for Investigative Journalism earlier this month.

Vázquez was mentioned in the leaked text messages, as Rosselló and Rivera made plans to travel outside the island, leaving her temporarily in charge of the government.

Vázquez’s name came up in the context of dealing with the legislative branch, led by Puerto Rico Senate President Thomas Rivera Schatz, who once called Vázquez the “secretary of nothing.”

Rivera Schatz is one in a short list of politicians who Rosselló has been rumored to consider naming secretary of state before resigning, essentially naming a new successor above Vázquez.

“If you elect [a lieutenant governor] and they’re on the same ballot [as the governor], it could be the solution to a future constitutional crisis,” said Ríos.

But many politicians are reluctant to leave their posts to take over in a tense time ahead of what looks to be a contested gubernatorial election in 2020.

In 2008, former Gov. Aníbal Acevedo Vilá (PPD) failed to win reelection amid a campaign funding scandal where federal charges were ultimately dismissed, but the political damage had been done and Acevedo lost to PNP rival Luis Fortuño by the largest vote margin in the territory’s history.

And the PPD, a party that’s been weakened in recent years, could ride the wave of protests that toppled Rosselló to return to power.

One of the top contenders for the party’s gubernatorial nomination is San Juan Mayor Carmen Yulín Cruz, a vocal progressive and opponent of Rosselló’s who was insulted in the text messaging group.

Cruz Friday warned on Twitter that “[President] Trump and his allies in Puerto Rico” could use the crisis to “give more powers to the [Fiscal Control Board], achieve more control over our institutions or name a czar or federal monitor.”

The PPD, an anti-statehood party, could look to tie the PNP’s statehooders to Rosselló’s disgraced administration and to federal oversight of Puerto Rico’s finances, ultimately attempting to make the case of federal interruption of Puerto Rico’s sovereignty.

While Rosselló and Resident Commissioner Jenniffer González-Colón are both PNP members and ran on a ticket together, the outgoing governor is a Democrat at a national level, and the sole non-voting representative is a Republican.

González-Colón, a popular former local legislator who was once the youngest Speaker of the Puerto Rico House of Representatives, declined to say earlier this week whether she will run for governor.

But González-Colón said the top priority for the territory of 3.2 million people should still be achieving statehood, in order to receive the same benefits as states of similar size.

In the meantime, said González-Colón, “sometimes you need to work behind the scenes to get things done.”

“I do believe that Puerto Rico needs to restore the credibility in Washington with all the agencies,” said González-Colón.